She has spent over 10 years touring with Circus Quirkus New Zealand ( 1997 – 2017) and continues to produce and coordinated resident contracts with AMP Capital, The Star Casino, Lunar New Year Campaign and Spring Campaign and have featured in Australian Circus Festivals throughout the country.

With a strong focus on creating independent work, and a healthy obsession for the art of clown, slapstick and vaudeville, Lil has created and toured several independent shows and worked with Opera Australia, Circa, Legs on The Wall, Aerialize, The Sydney Opera House Trust, the New Zealand Philharmonic Orchestra and Hoopla Circus.

Lil strives to produce work that is new and creative, building concepts (and props!) from scratch. There is always an aim to build something unique, unusual and yet functioning and playful.

Lil Tulloch was also featured as the swinging trapeze artist in Baz Luhrmann’s “The Great Gatsby.” 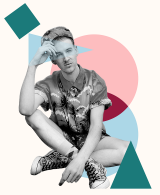